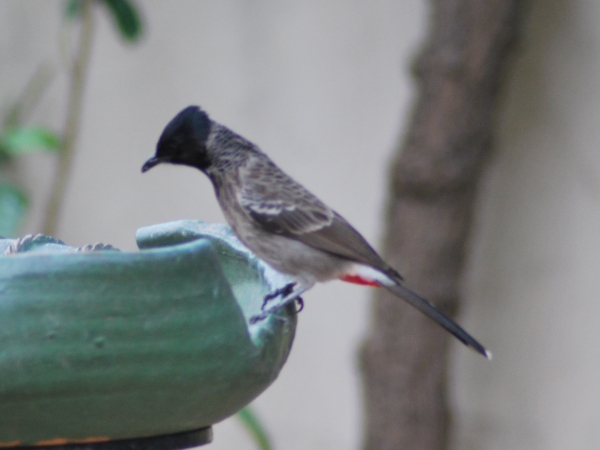 In the evening, the garden comes alive with birdsong. The sun’s slanting rays casts shadows over ferns and bushes, one minute there and gone the next! The movement of light over the little expanse seems to dance to the music of bulbuls. A pair frequents the garden. Their warbles and chuckles lull and soothe as they flit and fly fanning their tail-ends, alighting on top of a swaying leaf or stem. Resting a bit and giving out a gurgle, they fly off again. I envy their flight as I do their apparent freedom!       Bulbuls are known to be monogamous. This red-vented pair, I notice, has tried its best to nest in whatever is available in the little garden. A month ago, they had nested in the wicker basket that hangs over the front porch of the drive way. Soon enough, three eggs appeared which days later hatched into three baby bulbuls. I wondered how they would manage to survive the big-bad- world at large and decided to play grandmother bulbul! Asking the Mali to put green netting around the nest that would protect them, I imagined it would do the job! Kuldip and other staff kept an eye on the nursery. Toby and Tinker Bell the Siamese pair were forbidden to venture out on the porch overhead! Even the Mali refused to water the fern that housed them. The chicks seemed to be doing just fine. And I looked forward to the addition of new members to the bird orchestra in the garden very soon.Alas! Early one morning, as I stepped out of the front door, I saw the fern and lumps of moss in a heap before me. In a flash I knew what had happened, recalling that I had seen two stray cats lurking outside the evening before!

And yet the warbles and chuckles of the bulbuls continue. I am quite certain it is the same pair re-making their nest. They hover near the hibiscus bushes often. Four evenings ago I saw a stray cat roaming on the boundary wall. Tinker Bell, my crafty and thoroughly spoilt Siamese cat repeatedly visits the same spot on the wall.

Repeatedly I go out and bring her down. I am sure the bulbuls’ story isn’t over just yet. I instruct Kuldip to investigate and locate their nest. He peers and prods around in the bushes for a while but can’t find anything. I intuitively know he is wrong! The next day he informs me that he has located the nursery. It is in the hedge that overhangs the boundary wall but on the outside of it. I am delighted. Tinker Bell is forbidden to amble on the wall.

Bricks are brought in and the area on top of the wall to the left and to the right of the nest is cordoned off from the cats. Mr Crow knows something is up. He swoops down often enough and the pair flies about frenetically keeping up their shrill calls. We shoo the big black crow.

The rain comes down heavily. A calm descends. I visit the outer periphery and take a peek. I see three glorious little ones covered in their fluffy down feathers huddled together. The parents seem to understand my concern and watch a little cautiously giving out a rather nervous chuckle now and then. The Mali decides to hang a bit of green netting on the outside in the hope of keeping them safe. I ask the Universe to lend its whole-hearted support to this little family. I trust that this time my prayers will be answered. Sure enough in a few days, the glorious fledglings abandon their nest to take their perch in the neighbouring branches, testing their wings to soon fly away into the universe. 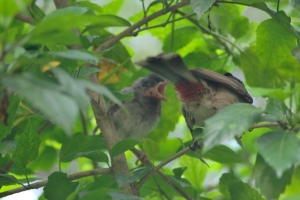 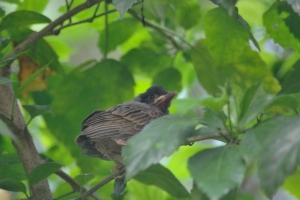 Poetic Landscapes Of The Spirit

Dunbar-based writer and editor Colin Will

A blog about visual hedonism in the most appropriate manner...